SpongeBob SquarePants is one of the most popular animated comedy television series amongst kids. It also makes a great theme for birthday parties and there are many creative ideas that you can incorporate that will make the kids feel like they are in the underwater city of Bikini Bottom, right out of a SpongeBob episode.

Some of these party ideas require some planning ahead, while others are extremely simple to implement. Some of these ideas include sending out SpongeBob SquarePants themed party invitations, creating and decorating an authentic party room, hosting several mini games, baking cupcakes and a birthday cake and many more. Let’s explore the best SpongeBob Birthday Party Ideas for your kid’s next birthday! 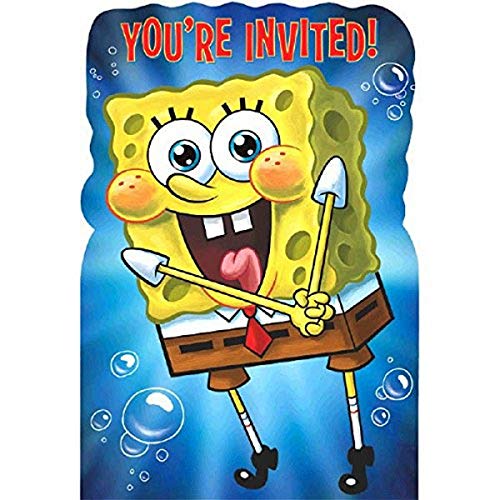 A themed birthday party is never complete without matching party invitations. Many people underestimate how much a physical invitation can affect the excitement levels of the party, compared to a text message or an email. A party invitation is also a great place to start with the overall planning process.

You can start with identifying what type of SpongeBob themed invitations you want to go for. There are quite a number of party invitations available. However, our favorite ones are the SpongeBob Party Invitations. The invitations will give your guests the impression of a well-planned party and it allows them to identify the theme of the party instantly.

It will transform any regular cake into a special SpongeBob birthday cake that will be perfect for your party. You can also add these cake toppers if you’re planning to get your favorite bakery to customize a birthday cake for you! Simply collect your cake and place these on top.

The supplies you’re going to use for your birthday party are extremely important. They will have the ability to transform a regular room into an immersive SpongeBob experience for all the guests. You should definitely not underestimate how simple party supplies make the atmosphere at a party more enjoyable for the kids and our favorite set that we recommend is the SpongeBob Birthday Party Supply Set, which serves 10 guests.

This SpongeBob Birthday Party Supply Set is a 115-pieces set that contains banners, a table cloth, napkins, plates, cups, goodie bags and everything you may need for the party. These party supplies are important because they will transform the entire room and make the kids feel as if they are in the underwater city of Bikini Bottom.

The great thing about these party supplies is that you won’t need many other decorations for the party, other than some balloons and wall decor. If you’re using other types of decorations to create your theme, try to ensure that they match in color and style.

A great way to decorate a room for a SpongeBob party is by placing some posters or balloons into plain looking areas. This 9-piece SpongeBob Party Balloon Set goes extremely well with your party supplies and helps to emphasize the party theme. This set contains 9 balloons that are all SpongeBob inspired.

You can either scatter them around the place or choose a particular area you wish to decorate. Depending on the size of the party room and the number of guests, you may be required to get multiple sets. This balloon set also goes well with other decorations such as posters, banners and figures.

Apart from all the fun activities, goodie bags are every kid’s favorite thing at any birthday party. Therefore, you should pay attention to creating the best SpongeBob themed goodie bags for the kids. There is a hidden rule that you should always try to match the goodie bags to the theme of the party. Now, that’s always a very tricky task to accomplish, which is why you should consider getting SpongeBob Goodie Bags.

These customized party bags will eliminate the need of getting all the items inside the bags to match the SpongeBob theme. This means that you’ll have a cool looking party bag for the kids and you’ll be able to put in any type of toys, bracelets, cards, candy or anything else that kids will love.

6. Pass Around Some SpongeBob Party Favors 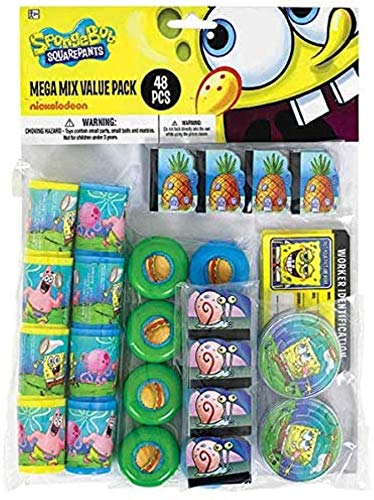 Party favors are an important element for birthday parties, as they give the kids a set of tools and toys that lets them engage in certain activities. One of our favorite party favors for any SpongeBob themed party is the SpongeBob Party Favors set. It contains a total of 48 items that can be mixed and matched accordingly.

They included SpongeBob themed yo-yos, ID cards, maze puzzles, notepads, sketch pads and prism viewers. You can either make these available for kids by placing them on the table or you can place some of these items into the goodie bags that you can hand out.

7. Make the Everyone Wear SpongeBob Props

Having kids wear costumes to a party is a great idea. However, organizing costumes for all guests can be a tough task, especially since kids require different sizes. A great alternative to party costumes are props or masks for the kids that match the SpongeBob theme.

The SpongeBob Party Prop Sunglasses are an ideal option if you want to make the kids dress up in style. This will make the kids look cool and it’s also something they can take home after the party. It’s also great for outdoor or pool parties, as the sunglasses protect their eyes from the sun. Felt masks are also a great idea and can be great for indoor use, too. 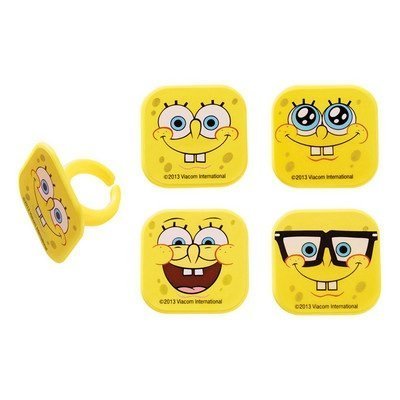 SpongeBob Cupcake Toppers (Pack of 24)
These SpongeBob SquarePants cupcake rings all have the main character’s face on them. Each ring measures 1 ¼-inches and it comes in 6 different styles. Decorate your cupcakes with these awesome toppers!
$10.46
Buy on Amazon

If you want to make the birthday party extra special, then you should consider serving some cupcakes. Everyone loves cupcakes, especially kids. Baking cupcakes along with the birthday cake will be a great addition to the party and will also help to accentuate the SpongeBob theme.

To make them special, the cupcakes should feature some sort of SpongeBob theme. A convenient way to do this is by adding SpongeBob Cupcake Toppers. They’re simple and effective, as they transform any cupcake into a special SpongeBob cupcake. The best part is that the kids can even wear the SpongeBob rings after eating the cupcakes.

You can even place these toppers onto store bought cupcakes and they work with any type. Try to get yellow colored cupcakes as they seem to match the SpongeBob theme well. You can also use yellow cake icing to style them yourself!

No one can deny that kids love to play around at parties. That’s why you should create a play area for the kids and add several mini-games. The great thing about party games is that it not only keeps them busy, but they’re also able to sharpen some of their skills and engage with other kids at the same time!

You can even host a mini competition by grouping kids up in teams so that they can compete for small prizes. You can then organize a winning ceremony where the winner gets a SpongeBob Trophy and of course all the bragging rights! 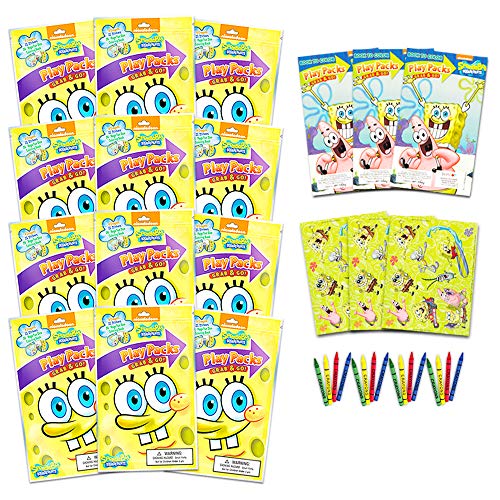 SpongeBob Coloring Book Party Favors (Bundle of 12)
This set of coloring party favors comes in a bundle of 12. They contain stickers, coloring books, crayons and stickers that kids can use during a birthday party. They’re the perfect items for coloring activities.
$21.95
Buy on Amazon

If you’re having many kids over for the birthday party, then you should ensure that everyone is having fun and that no one is left behind. You could also think about organizing a coloring book area so all kids can play together and get really creative. You can get as many SpongeBob coloring books as needed so that every kid can enjoy coloring their favorite SpongeBob characters. It’s best to get a bundle of coloring books instead of one large one.

A great bundle is the SpongeBob Coloring Book Party Favors, which includes a total of 12 SpongeBob play packs that contain stickers, coloring books and crayons. These packs include everything you need to create the coloring book area for kids. A set like this could save you a lot of time, effort and money.

11. Watch Some SpongeBob Episodes on Television 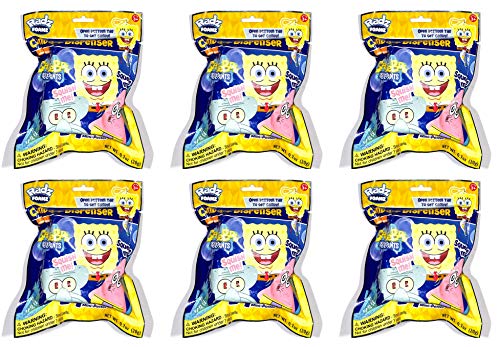 SpongeBob FOAMZ Party Candy
These candies are extremely delicious and each comes with an edible SpongeBob SquarePants character. There are a total of 6 different characters that the kids can discover! A great candy for all types of parties!
$14.99
Buy on Amazon

Here’s a simple challenge, name a kid that you know who doesn’t like candy? Well, it’s kind of hard right? That’s because all kids absolutely love candy and they will even go out of their way to get some! If you want to make all the kids happy at the party, make sure to have some candy available. In fact, lots of it!

If you want to make it extra special for them, then you should distribute some SpongeBob FOAMZ Party Candy, so the kids can feel the SpongeBob vibe and enjoy the awesome taste. The SpongeBob FOAMZ candies contain a random character and are absolutely perfect for birthday parties.

13. Have a Photo Session with a SpongeBob Backdrop 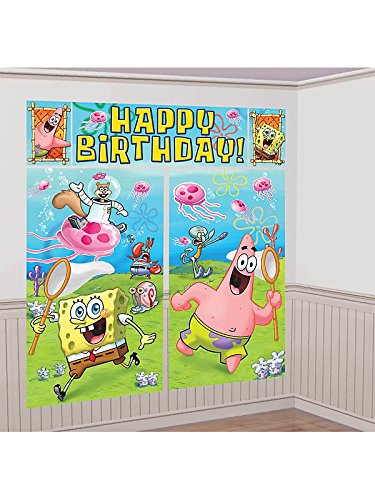 SpongeBob Party Backdrop
Set the scene for an awesome SpongeBob birthday party with this cool backdrop! It features posters with your favorite characters from Spongebob and a large 'Happy Birthday' banner. It contains 2 banners that are 32.5-inches x 59-inches in size
$30.99
Buy on Amazon

There’s nothing better than taking memorable photos of the party that last forever. We all take pictures of important events and reflect on them years to come. Don’t forget to take plenty of pictures at your kid’s birthday party! Sometimes, it can be a bit frustrating if the photos don’t turn out the way that you want them to. To avoid such a situation, you should create a perfect environment to take memorable pictures.

A great idea is to take some of the SpongeBob decorations and place them into a frame that has a SpongeBob Birthday Backdrop. This is ideal for taking photos with the kids and their party bags. Be mindful to choose the location and place of the photo booth carefully and also try to get some good lighting. If you’re hiring a photographer for your birthday party, you can simply request them to help you set up the decorations and backdrop accordingly, in order to make the pictures look more lively.

14. Hand Out SpongeBob Thank You Cards 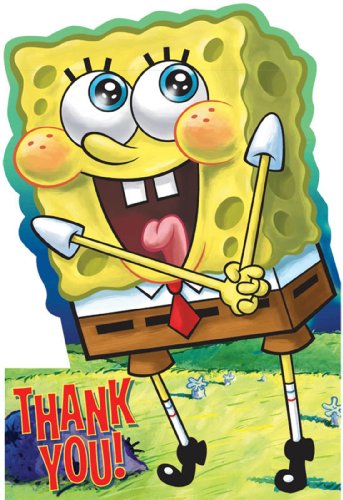 SpongeBob Thank You Cards (Pack of 8)
Thank your guests for attending your kid's birthday party with these awesome SpongeBob thank you cards. They come is a set of 8 and each card comes with a matching envelope
Buy on Amazon

After hosting a successful SpongeBob themed birthday party for your kid, it’s always a nice gesture to thank the kids for coming and making the day fun. One way to thank them is to hand out Thank You cards with a small written personal note.

These SpongeBob Thank You Cards come with matching envelopes and are great for this situation. Ensure to get enough so that you can hand one out to every single kid who attended the party. If you’re planning to pass out the goodie bags towards the end of the party, you can also place the thank you cards inside the goodie bags.